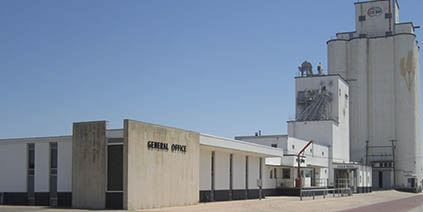 Kevin Royer joined Midland Marketing in 1991 as a Location Manager at the Plainville location. He later took on the North Area Manager and Agronomy Manager roles until 2018 when he was promoted to CEO. Before joining Midland, Kevin worked at IBP in Emporia, Kansas as a Line Production Manager. He has also served as an Associate Board Member for Servi-Tech and Assistant Chief of the Plainville Volunteer Fire Department. Kevin earned a B.S. in Agricultural Business from Fort Hays State University. He grew up in Pretty Prairie, Kansas helping his uncle farm during high school. He also worked with a Millwright firm for several years. Kevin and his wife Debbie have two daughters: Jessi and Ashton. Jessi is married to Taylor and lives in Baldwin City, Kansas, and Ashton is working on her master’s degree at FHSU. In his free time, Kevin enjoys fishing, golf, and BBQ.

Blake Schonthaler has over a decade of experience at the company and is currently the Chief Financial Officer. Previously, Blake worked as the Staff Accountant for eight years and has assisted with IT duties. He grew up on a family farm north west of Hays. He attended Fort Hays State University and graduated in 2008 with a Bachelor of Business Administration in Accounting. In his free time, he enjoys working on projects in his shop and mountain biking at Wilson Lake and in Colorado. Blake is always rooting for the Royals and the Kansas Jayhawks!

Kelly Brady joined Midland Marketing in November of 2017 as Assistant Controller. Before joining Midland, he worked for Crawford Supply Co. in customer support and IT for three years. Kelly graduated from Fort Hays State University in 2014 with a bachelor’s degree in Business Administration. He grew up in a small town in southwest Kansas. His parents were both farmers; his dad is an owner operator of a trucking business, and his mom has worked at a John Deere dealership for over 20 years. Kelly and his wife, Victoria, have a son, Brody. In his free time, Kelly enjoys golf, hunting with his dog Fury, watching sports, and spending time with his family.

Liesel Sims began working part-time at Midland Marketing in the Spring of 2016 while completing her education at Fort Hays State University. She grew up in eastern Colorado. She moved to Hays in 2015 to attend college. She completed a Bachelor of Business Administration in Management in 2018 and a Master of Business Administration in Human Resources in 2019. After graduation, Liesel was hired as Midland’s full-time Human Resources Person. In her free time, Liesel enjoys working out, traveling, and cooking.

Doug Dreiling joined Midland Marketing in September of 2010 as the Central Area Manager. In September 2019 he assumed the role of Grain Merchandiser. Before joining Midland, he worked for BASF as a Sales Representative in northwest Kansas. Doug grew up in Hays and graduated from Fort Hays State University with an Agricultural Business Degree. He and his wife Lindsey have four children: Dylan, Elle, Beau, and Colton. In his free time, Doug enjoys staying involved with all his kids’ activities.

Wes Martin joined Midland Marketing in March of 2012 as an Intern. He served as Shop Hand and Applicator for Plainville and Hays and later became Central Area Manager. Wesley grew up in Herndon, Kansas on a family farm with cattle and dry land crops. He attended Barton Community College and Fort Hays State University, where he received a General Ag degree. Wesley and his wife Shelby have a daughter, Brynlee.

Steve joined the Midland Marketing team in October 2020.  He has been active in the agri-business sector for more than 35 years.  Steve grew up in the grain business like his father and has had the opportunity to be involved in agriculture for as long as he can remember.  Steve attended Hutch Community College where he met his wife. He worked his way through college on the second shift at the Far-mar-co terminal grain elevator cleaning out Boot pits, loading/unloading railcars. Steve took a year off from college after receiving his associate degree at Hutchinson Community College, working in the elevator maintenance department and with Joni’s help, Steve finished his college degree at FHSU graduating in 1984. After graduating he was hired by Perryton Equity Exchange as a location manager in Beaver, OK and maintained a hand DPR at four other branch locations in the NE region of Perryton’s territory.  Within a couple years he was promoted to Regional Manager.  Three years later Steve was offered the GM position at the coop in Laverne, Ok, and for the next 10 years managed financially stressed Coops. He worked for The Cooperative Finance Association for the last 13 years as a loan officer, credit analyst and trainer for the Central region, Steve also worked for AgTrax Technologies on the installation and Software support in the southern region of the US.
Steve has been active in the communities he has been a part of by participating in the Oklahoma Coop Council as a board member, Marshall OK Volunteer fire and first responder, Scottish Rite Mason, and a Shriner.  Steve is married to his lovely wife Joni and they have a beautiful daughter Rebecca.  Steve enjoys cutting horses, fishing, hunting and the occasional golf game.

Melanie Wendling-Staab joined Midland Marketing in 2017 in Grain Accounting. Before joining Midland, she worked as Customer Service Assistance and A Crop Insurance Agent for 13 years at High Plains Farm Credit. She also worked as A Crop Insurance and Property and Casualty Agent for 4 years at Heritage Insurance and served as CNA and Ward Clerk at Graham County Hospital for 6 years. Melanie is also a School Board member, a City Council member, and Emergency Medical Technician. She attended Fort Hays State University and earned a Bachelor of Science in Agri-Business. Melanie grew up on a farm in Northern Ellis County and still helps with the farming operation today, which consists of wheat, milo, and cow/calf. She is married to Todd Staab and they have three children Coedy, Chrys, and Cassidy.  The boys farm with their dad and Cassidy is an in nursing school and working at Hays Med Center. In her free time, Melanie enjoys working with cattle, deer hunting, fishing, racing, and cooking.

Audrey Werth joined Midland Marketing in March of 2019 and worked with the Grain Merchandising Advisory Program. In August 2019 she began her role in Customer Relations. Before joining Midland, she was a Commercial Lender at Commerce Bank for 8 years. Audrey serves on the Ellis County Farm Bureau Board, Community Development Committee of the K-State Research, and Extension Council for the Cottonwood District. She is also actively involved with the Hays Area Young Professors, Hays Area Chamber of Commerce, and Immaculate Heart of Mary Church. Audrey attended Fort Hays State University and earned a B.S. in Agriculture. Audrey grew up north of Hays on a farm and ranch, where her parents still raise cattle and farm. Growing up, she showed cattle and pigs in 4-H. In her free time, Audrey enjoys spending time outside with her dog, being at the lake, and traveling. She also loves cooking and being crafty.