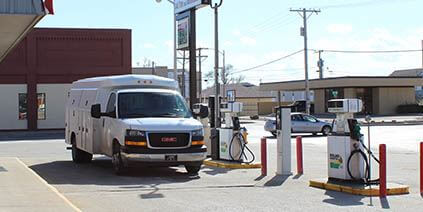 Steve Hageman joined Midland Marketing as Harvest Help in the grain elevator loading grain cars, filling anhydrous tanks, and driving fertilizer and propane deliver trucks. He later moved to Automotive Service performing oil changes, and tire and brake replacement. In January of 2010 he became Petroleum Manager. Before joining Midland, Steve worked at Thompson Cattle Co., Stamper Farms, and Hageman Harvesting. He has also served on the board for the Regional Tire Association from 1996 to 1999 and was a School Board member for the Parochial Elementary School in Plainville, Kansas from 2007 to 2009. Steve attended Washburn University for two years. He was raised on a family farm north of Plainville as the youngest of nine children. They were taught religion, family values, and hard work, and they helped on the farm by milking cows, raising beef cattle and pigs, and wheat farming. Steve has a son, Ryan Hageman. In his free time, he enjoys sports and spending time with family and friends.